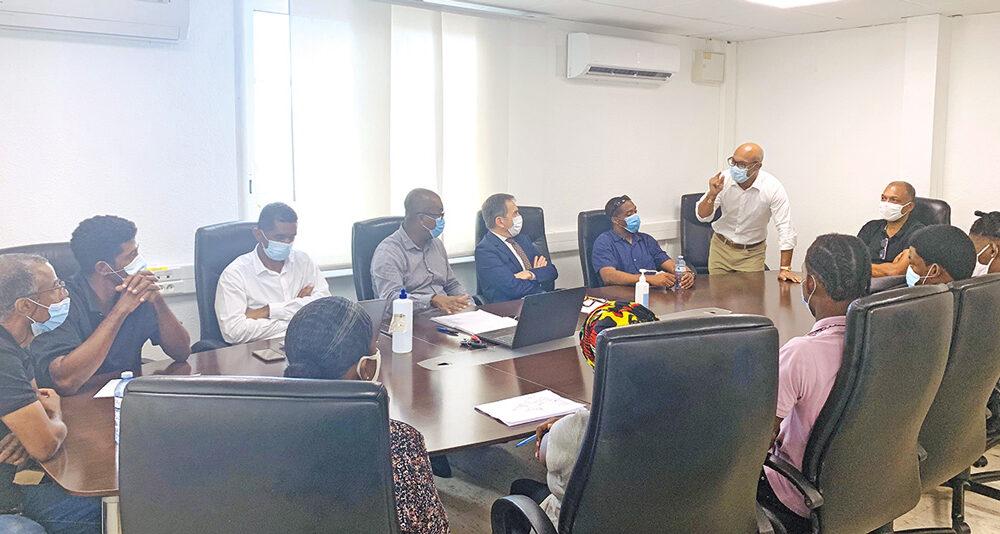 The Collectivité of Saint-Martin, represented by Jocelyn Elouin, Deputy Director General of the Human Development delegation and Médhi Boucard, Director of Education, received a delegation from the vocational school of the northern islands, in the presence of the vice-rector Michel Sanz , Thursday January 14, composed of teachers and students of the Wood section.

President Daniel Gibbs also met the delegation to inform them of the decisions taken by the territorial institution to support the rehabilitation of the wood section as well as its strong desire to create optimal learning conditions for the students of Saint- Martin. A particularly constructive meeting during which the president of the Collectivity undertook to closely monitor the situation of the students in the wood section.

As already announced in a press release, on January 10, the Collectivity confirms that the Executive Council voted to grant a grant of € 277 in favor of the professional high school of the Northern Islands, so that it can in particular equip the woodworking apprenticeship section and buy back the machines and tools necessary for the already existing sectors.

This point was clarified during the meeting with the delegation, because it is indeed a question of allowing the school to buy the material which it needs for the sections already installed and to equip in a second time the future BTS "Wood. »At the next school year. The decision to award a grant was taken unanimously during the Executive Council on Wednesday, January 13, 2021. This grant will be paid to the vocational school as soon as possible.

The Collectivity is also committed to carrying out an on-site visit as soon as possible, in order to establish a joint inventory with the school management on the work still to be carried out and to develop an action plan to resolve the needs. of the establishment. The same method will be applied to other schools. As a reminder, the Collectivity has invested more than 20 million euros in the reconstruction of the 18 solar establishments from Irma, with the support of the European Union Solidarity Fund, and has always been very attentive to the situation of the students. .

President Daniel Gibbs wished to remind the speakers of the many projects carried out simultaneously by the Collectivity for 3 years: “Everything is urgent and I know that sometimes things do not go quickly enough. Know that we are fully mobilized to resolve each situation and that we do everything we can to meet your expectations. This is the case for this case which should be resolved very quickly ”.

With 95% of its fleet impacted by Hurricane Irma, Semsamar estimated the damage at 72 million euros. Technical diagnoses have been ...