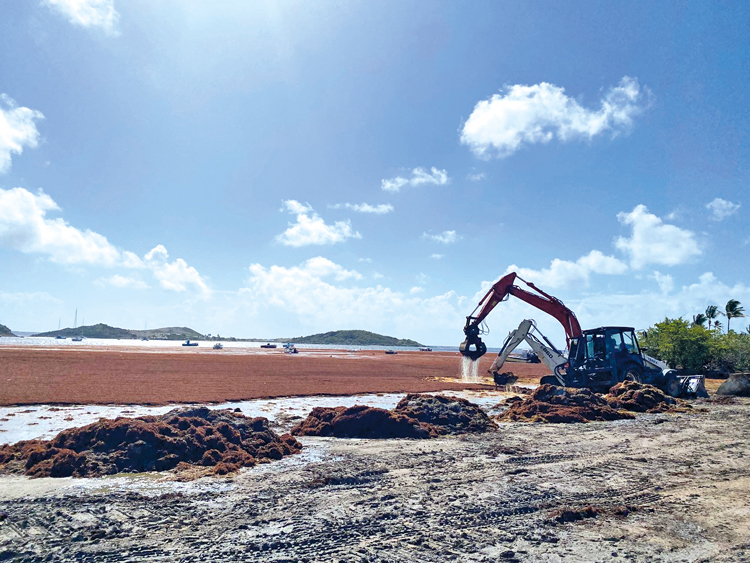 After an alarming report published last Monday by the Regional Health Agency (ARS) concerning the levels of hydrogen sulphide emitted by sargassum washed up in Cul-de-Sac, new measures were taken in the middle of the week with results markedly improving.

Following the massive grounding of sargassum in Cul-de-Sac, the president of the Collectivity, Louis Mussington, had requisitioned by emergency decree on July 27 the intervention of several companies in reinforcement to carry out an intensive collection of algae in this area. The rates published in the ARS report on Monday August 1 are high: 4,8 ppm at 5 meters from the sargassum groundings and 3,2 ppm at the level of dwellings. Following these worrying results, the services of the Prefecture decided to carry out new measurements suspecting the rates of being influenced by the strong emanations of gas related to the fact of stirring the algae in the process of collection. The recent readings of hydrogen sulphide in Cul-de-Sac would therefore confirm this hypothesis, indicates Fabien Sésé, secretary general of the prefecture of Saint-Barthélemy and Saint-Martin. “We note a positive trend following the latest measurements. Indeed, the rates are down: 2,2 ppm near grounding areas against 4,8 ppm last Monday. In terms of homes, the new readings indicate a hydrogen sulphide level of 1,4 ppm, more than half of the 3,2 ppm measured last Monday. If intensive collection is an effective process for which the State has just temporarily and exceptionally increased its subsidy rate from 50% to 80% until October 15 with a request from Jean-François Carenco, Minister Delegate for Overseas, to give priority to employing staff on integration contracts (PEC) for the collection of algae, many inhabitants of Cul-de-Sac express the wish that a more sustainable solution be put in place to prevent other massive groundings which have undeniable consequences on the quality of life and the health of the surrounding population. The ARS recommendations for measurements between 1 and 5 ppm are to stay away from sites affected by the stranding of decomposing sargassum. Beyond 5 ppm, a rate which was almost reached last Monday, the ARS recommends the evacuation of areas at risk. New measurements will be taken this Friday, August 5. As for the forecasts disclosed by Météo France at the beginning of the week, the risk of grounding was medium for Saint-Martin and Saint-Barthélemy where many rafts are detected to the east and immediate south-east of the two islands. A lot of seaweed will pass near the islands or wash up on the coast exposed to the flow during the coming week. _Vx

Citizenship: One fire in two is due to recklessness!

The Prefecture of Saint Barthélemy and Saint Martin and the Collectivity of Saint Martin call for caution and compliance with regulations ...