Trial of D. Gibbs: the cases where the prosecution admits his guilt 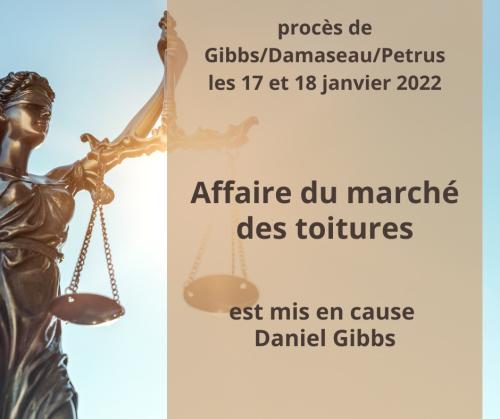 In 2018, the president of the COM wanted to "help repair the roofs of idle people", after Irma. In compliance with the public procurement code, a contract in the amount of 5 million euros was published in May 2018 for the installation of the roofs and the supply of materials.

Although the administrative procedure is regular, the market “is riddled with irregularities”: the COM cannot finance the work of individuals except in the event of an urgent need. She is alerted a few weeks before the end of the market, which is then immediately stopped. The paying treasurer refusing to pay the companies which have already carried out work for a total amount of 352 euros, due to the illegality of the subject of the contract, the COM services must find a way to compensate all the same businesses, or a transactional protocol. In this case, even if he admits the difficult situation post Irma and the need to come to the aid of the most affected population, the prosecutor considers that the offense is materially characterized and thus recognizes "his guilt" of Daniel Gibbs but exempts him of pain.

Case of the 3 suppliers

This so-called three-vendor case was the last to be heard by the court and the fastest – in an hour –  given the simplicity of the facts.

In 2018 and 2019, the paying treasurer refused to honor the payment of three suppliers to the Collectivity, on the grounds that the amounts greatly exceeded the 25 euros of the regulatory threshold for public procurement beyond which a public procurement procedure is mandatory.

These amounts – €146, €000 and €139 – correspond to the balances still to be paid. In order for these three companies to be paid, a transactional protocol is proposed. The President of the COM gives his agreement and the Executive Council validates the decision. The elements of the investigation show that these companies have been working for several years with the COM and that they have never responded to a contract; they have always been paid piecemeal. The prosecutor actually observes that this operation is not new, but recognizes all the same the guilt of the president of the COM who is supposed to know the rules of public order. He requires a waiver.

The court will deliver its deliberation on February 24.

Saint-Martin's Day: A large essay contest organized on both parts of the island

As part of the Saint-Martin's Day celebrations, the “ONE SXM” Association is organizing an essay competition for high school students and ...