Perpetuating the tradition of punch, from Colombier to Marigot 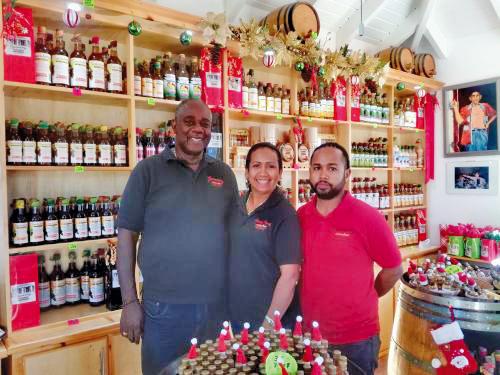 On the occasion of a series of portraits of traders who have taken up the challenge of settling in or returning to Marigot, meeting with the Maccow family who want to perpetuate local customs in their shop.

Since the beginning of last July, a new Creole-style boutique has caught the eye of passers-by, at the crossroads between rue de Hollande and rue de Concordia. Here, we mainly sell homemade punch, and in particular that of Guavaberry (red or yellow). Hence the name of this family business: (Guavaberry) Colombier Tradition. Louis and Luz-Maria Maccow, as well as their son Jasmel, perpetuate local customs, which they inherited from their parents or adopted when arriving on the island.

“It started as a hobby in 2004” remembers the couple in whose garden the guavaberries grow. Initially, the spouses apply the ancestral recipes of Colombier to make a few bottles which they distribute to their friends. Then they decide to professionalize, in parallel with their car rental business. They age certain wines because they have no doubts about it: "the older the better". For many years, their beverages were distributed in several outlets, partly Dutch. Before this July 2018, they had never had their own store.

“We had started the opening project long before Irma. Marigot lacked shops offering local specialties, ”they explain. They were waiting for the COM, owner of the premises, to renovate the hut. The location was not chosen at random. “This place means a lot to us because it is part of the history of Saint Martin. This is where the Milo Rhum Shop was located. Everyone knew him, ”says Louis Maccow. There was therefore no question of settling elsewhere.

The couple indicate trying to develop the share of tourists in their clientele. He fitted out the terrace in front of the shop to receive them and worked with cruise ships on the Dutch side to be part of the stages of cruise passengers during their stopover on the island.

As for economic activity in Marigot and Saint-Martin in general, Louis Maccow remains optimistic: “It has to start again. We can't stay like this. There is no reason why it should not work ”.

ENVIRONMENT: Since Irma the ecosite has received 1784 end-of-life vehicles

From Irma, the Grandes Cayes ecosite managed by VERDE-SXM has received 1784 ELVs (End of life vehicles), half of which are provided by insurance, around 300 ...
%d bloggers like this page: