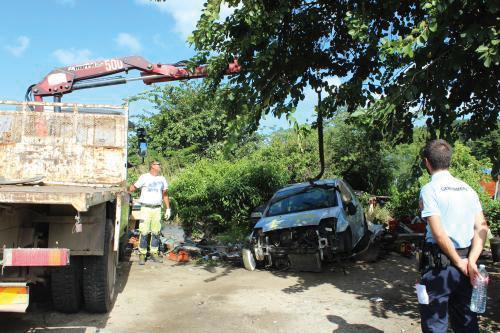 To investigators and to the bar, JL, 52, admitted the facts. He has never created a business, never asked for authorization as the environmental code requires, never published invoices to his customers.

He did not dispose of his waste. He also does not have written authorization from the family and the COM owners of the land he occupies rue de Hollande. After years of letting the authorities control his establishment in 2016. He was reminded of the law and invited to comply. Several months later, in early 2017, a second check was carried out and it was found that no action had been taken. He said that he went to the CCISM to look for the forms but did not fill them out. It was then that all the material was seized. Twenty-six car carcasses were removed and destroyed.

JL claims not to have worked since. "I can't because I don't have any tools," he said. "With all the cars to be repaired on the island at the moment, it must be easy to find a job, especially since you are competent since you have a mechanical CAP," replied the court. But he replied: "I don't want a boss". He is helped financially by his sister who "is under director at Pôle Emploi". The deputy prosecutor requested a suspended sentence of eight months in prison, a fine of 6 euros, the confiscation of property and a ban on operating a classified facility for three years.

After deliberation, the court imposed a suspended sentence of eight months in prison, a fine of 6 euros, half of which was suspended and the confiscation of the tools.

"Showme Caribbean": the beauty of our beaches in video