Covid-19: are the alert thresholds crossed on the island? 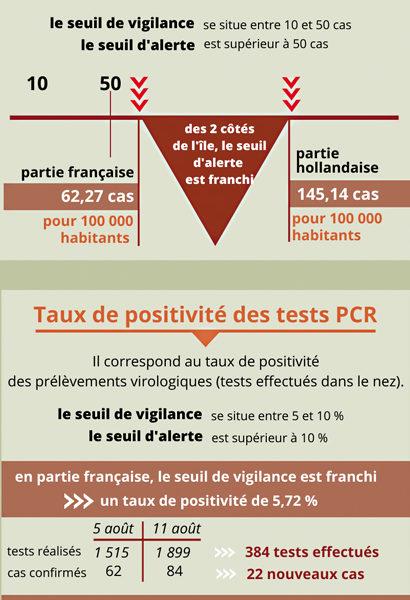 To estimate the circulation of the virus in the territory, the health authorities have set up three indicators, each with vigilance and alert thresholds.

These epidemic surveillance indicators are: the incidence rate, the effective number of reproduction (average number of people that a sick person will infect), hospital tensions on intensive care beds and the positivity rate of PCR tests. . “As soon as a threshold (of vigilance and / or alert) is crossed, an in-depth risk analysis is launched in order to identify the causes of the signal and trigger an alert if necessary. The thresholds used are particularly sensitive, which allows an early reaction and therefore the rapid taking of measures in the event of a proven deterioration of the epidemiological situation ”, indicates the Ministry of Health.

Based on the publicly available figures for the island, we measured two indicators.

Last week (between August 5 and 11), according to health bulletins, 22 positive cases were declared partly French and 59 partly Dutch. The incidence rates are respectively 62,27 and 145,14 cases per 100 inhabitants.

On both sides of the island, the alert threshold for the incidence rate has been greatly exceeded.

During the last week, according to health bulletins 384 tests were carried out partly French and 167 partly Dutch, with 22 and 59 positive cases revealed.

The positivity rate is 5,72% and 35,32% respectively: partly French the vigilance threshold has been crossed, partly Dutch the alert threshold.

Nota bene: on the basis of a population of 35 inhabitants partly French and 330 40 partly Dutch.

Tourism education is governed by a tripartite agreement created in 2013 and recently renewed in 2020 between the Community, the Tourist Office and Education ...
%d bloggers like this page: